The successful results of the restiffic clinical trial were published in the Journal of the American Osteopathic Association in July 2016, in the article “Targeted Pressure on Abductor Hallucis and Flexor Hallucis Brevis Muscles to Manage Moderate to Severe Primary Restless Legs Syndrome” by Phyllis J. Kuhn, MS, PhD; Daniel J. Olson, DPM; John P. Sullivan, MD. To view the article on the JAOA’s website, click here. 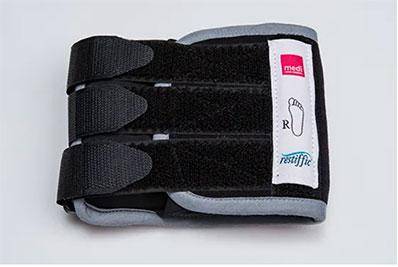 Introduction: Restless legs syndrome (RLS) is a neurological disorder that causes unpleasant sensations and a need or urge to move the legs. The sensations are often described as burning, creeping, tugging, or feeling like insects are crawling inside the legs. The symptoms commonly develop when a person is at rest and tries to relax or go to sleep. RLS inhibits people from sleeping, which can lead to depression and a poor quality of life.

Until now, potent drugs including opioids, central nervous system depressants, and dopamine agonists have been used to ease symptoms, but each of these is accompanied by many negative side effects. Examples include dizziness, nausea, vomiting, and the risk of addiction.

restiffic is a drug-free solution to RLS. It is a revolutionary foot wrap consisting of a compressive pad and a hook and loop system, designed to exert a gentle, relaxing pressure on the abductor hallucis and flexor hallucis brevis muscles in the foot. This pressure reduces the symptoms of RLS. 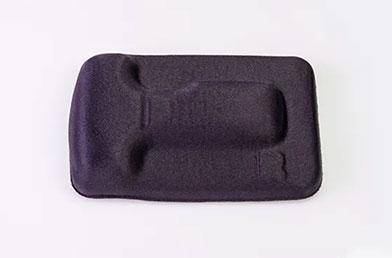 Method: A clinical trial was administered to test the efficacy and safety of restiffic. The Principal Investigator of the clinical trial was Daniel J. Olson, DPM; Sub-Investigators were John P. Sullivan, MD and Frederick J. Tomassi, DPM. It was a single arm, open label clinical trial with a repeated measures design. The study population consisted of 30 otherwise healthy adults, mean age 51.5 years (range 30 to 75 years), diagnosed with moderate to severe primary RLS.

Efficacy was measured using the International RLS Study Group (IRLSS) Rating Scale, with scores ranging from 0 to 30 (30 being the most severe), and the physician-generated Clinical Global Impression (CGI) Scale, measuring severity, improvement, and Efficacy Index (EI). Safety was assessed by recording adverse events, analyzing the severity, and the relationship to the restiffic device. restiffic is easy to apply

During the study, patients recorded their RLS symptoms over 8 weeks. After one week of observation without treatment, patients were given a pair of restiffic devices for Weeks 2 through 4. The devices were removed for Week 5, and returned to the patients for Weeks 6 through 8.

Results: In Week 1, all patients exhibited severe symptoms of RLS, with an average patient IRLSS score of 25.05 (“severe”). When patients began wearing the devices, many experienced relief after just 24 hours of therapy (Day 8), with the mean IRLSS score decreasing from 25.05 to 16.94 (“moderate”) in just one day. Patients’ RLS symptoms decreased significantly and continually over the course of the next three weeks, with an average IRLSS scores at the end of Week 4 of 10.88 (“mild”). When the devices were removed for Week 5, patients once again experienced severe RLS symptoms, though not as high as initially seen in Week 1. In Weeks 6 through 8, patients again showed significant and continued decreases in their RLS symptoms while wearing the restiffic devices.

Over the course of the trial, patients exhibited an average 69% reduction in the severity of their symptoms, with the average patient IRLSS score at the end of the trial being 7.83, for an overall reduction of 17.22 points. This represents an improvement from “severe” to “mild” symptoms.

Based on the study results and the low-risk nature of the device, restiffic was cleared by the FDA as a Class 1 device for prescription use to support positive RLS diagnosis.

How do I get restiffic for my patients? If you are a clinician interested in providing restiffic for your patients, email us at clinical@restiffic.com or call us at (800) 633-6334. Questions, comments? Just need to get in touch?

CONTACT US or call 855-700-6875
For international orders, please send an e-mail to: intl@restiffic.com MyFace2FaceMD™ is a patient centered telemedicine service, which is committed to providing the highest quality patient care available. Our healthcare services are available to anyone, anywhere, 24/7/365 from your computer, phone, or tablet.